A Poet On Broadway-Lorenz Hart

One of the defining characteristics of the music of this period that much of  it is still with us. Much of this music is still being played, sung, recorded now, well into the 21st Century. Perhaps this is partly because, although individual musicians, singers and bands are very much part of the appeal of this era, it is more than anything the age of songwriters. Some of them, for sure, could be classed as “singer-songwriters” but even these artists saw songwriting as a distinct art and craft.

This is the time of Cole Porter, Hoagy Carmichael, Irving Berlin and so many more. It is no coincidence that this is also when we have the development and spread of radio, more and more sophisiticated recording techniques and reproduction equipment, fundamental changes in musical theatre, film musicals (not possible before about 1927); and tremendous social upheavals – not least the Second World War.

Musically the period begins with the “Jazz Age”. That is to say the time when a range of music was lumped together under the heading of “Jazz” and found its way into the popualr music of the day; and I think we can define the end of this long 1930s and 1940s with rise of Rock and Roll. 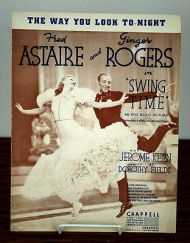 The Way You Look Tonight was written for the film Swingtime by the writing team of Jerome Kern and Dorothy Fields. Swingtime was the sixth in the series of films that starred Fred Astaire and Ginger Rogers and was released in 1936.

Jerome Kern and Dorothy Fields had previously encountered one another in the context of a previous Astaire/Rogers film, Roberta, when Dorothy Fields and Jimmy McHugh had been brought in to add extra material to the songs carried from the stage musical written by Jerome Kern and Otto Harbach.

The partnership of Jerome Kern and Dorothy Fields was perhaps slightly odd in that there was a twenty year difference in their ages. Jerome Kern was one of the most respected Broadway figures of the time, composer of Showboat and many other successful shows including from 1915 to 1924 the so called ‘Princess’ shows created by Kern, Guy Bolton and P.G. Wodehouse at the Princess theatre in New York.

Dorothy Fields had already had her own successes with hit songs written in collaboration with Jimmy McHugh, songs such as; I Can’t Give You Anything But Love, On The Sunnyside Of The Street, Don’t Blame Me and I’m In The Mood For Love.

The film Swingtime also gave birth to; Pick Yourself Up, A Fine Romance, Bojangles Of Harlem and “Never Gonna Dance”.

Jerome Kern, one of the great melodists, and Dorothy Fields, who could create exceptional lyrics from seemingly ordinary common place phrases made one of the most perfect writing teams of their time.

When Swingtime was released in 1936 ‘Swing’ had just been brought to the attention of the general public. First by the success of Benny Goodman’s Orchestra and subsequently every other band that now insisted they played Swing. The word Swing and the style of music was not new, as bands had been playing in this style for a while, particularly black bands such as that of Jimmie Lunceford and Duke Ellington had written and recorded  It don’t mean a thing if it ain’t got that swing in 1931. But Swing was now the thing.

The way you look tonight, of course isn’t a Swing tune at all, in fact Jerome Kern did not really have feel for or much of a liking for Swing. And if you expect Swingtime to be a film featuring big band swing, you are going to be disappointed.

The song appears in the film in a scene set in Ginger Rogers’ hotel room. In which there just happens to be a grand piano.

The set-up for the song is this. Lucky Garnett (Fred Astaire) and Penny Carroll (Ginger Rogers) are having a fairly mild argument and Ginger Rogers goes into the bathroom to wash her hair. Astaire pretends to leave the room but creeps back in and sits at the piano. As he begins to play the song Ginger Rogers emerges from the bathroom her hair covered in shampoo bubbles. It is only when she looks in the mirror that she remembers her appearance and she rushes back into the bathroom.

As it is played in the film it has a deceptively simple introduction leading into a lovely rising melody. But it is the middle section that really lifts the song. It moves from its starting key of Eb to Gb carrying the whole tune forward and then comes the real emotional impact of the melody as it moves back to the original key with the words:

‘And that laugh that wrinkles your nose, touches my foolish heart’

And we’re back in the original key on the word heart.

No matter how many times I play and sing this song, this line gets me every time. And, if you do it right it gets the audience as well. I always look for the faces and the change in their expression at this moment.

The lyric begins the last chorus simply with the word lovely, following on perfectly from the previous line.

Singer Mary Cleere Haran who has featured the work of Dorothy Fields in her stage shows and on her 1992 album Live At The Algonquin comments on the very first stanza of the song.

‘Someday, when I’m awfully low/ When the world is cold/I will feel a glow just thinking of you/And the way you look tonight’

Mary Haran says ‘A complete sentence, masterfully written, expressing a full thought. Its irony is contained in the fact that the speaker is predicting that this moment will be one of the most beautiful in her life and the object of her love is frozen in a planned instance of nostalgia knowing that this will never be again, loving her object in both the present and the future. I think this is the most beautiful ever written’.*

I don’t think Mary Haran is too far from the truth with that statement.

*as quoted in On The Sunny Side Of The Street– The life and lyrics of Dorothy Fields.

A Poet On Broadway 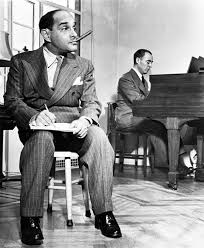 “A poet on Broadway” is the title of Frank Nolan’s 1994 biography of Lorenz Hart. Lorenz “Larry” Hart was the lyric writing half of the song writing partnership of Rodgers and Hart. Many people are aware of the writing team of Richard Rodgers and Oscar Hammerstein, with musical shows such as Oklahoma, Carousel, South Pacific and The Sound Of Music; but I wonder whether many people are aware of how many great and enduring songs came from the Rodgers and Hart partnership.

Richard Rodgers and Larry Hart were introduced to each other at Columbia University in 1920 when Richard Rodgers was a sixteen year old freshman and Larry Hart was doing post graduate work. They immediately clicked as a team and began writing songs for College shows and charity events. They were, however, very different in temperament. Richard Rodgers came from solid middle class stable background and this showed in the way he worked at his music. The household that Larry Hart grew up in tended towards the chaotic, his father pursuing a series of more or less successful money-making schemes. Larry was unpredictable in his timekeeping and  would be prone to disorganisation. In at least one instance, writing lyrics for a song on a piece of scrap paper, losing the piece of paper, and having to phone a friend to who he had read the lyrics, in the hope the friend could remember them.

Larry, very much deserved the title of “A Poet On Broadway” with lyrics for such songs as, “Bewitched, Bothered And Bewildered”, “My Funny Valentine”, “The Lady Is A Tramp” and “I Could Write A Book”.

Rodgers and Hart’s first big success was with the song “Manhattan” –with lines like:

We’ll bathe at Brighton, the fish you’ll frighten, when you’re in.

Your bathing suit so thin, will make the shellfish grin, fin to fin

Or how about this from “Nobody’s Heart”

Nobody’s heart belongs to me

Nobody writes his songs to me

Nobody belongs to me

That’s the least of my cares

Only my book in bed
Knows how I look in bed
Nobody hears when I cry
Everybody has someone
Why can’t I?

Larry Hart died in 1943 at the age of 47. The death certificate gave pneumonia as the cause of death but it would probably be more accurate to say that alcoholism and depression were major factors.

Larry Hart was gay man at a time when that was not easy and was a man who also chronically lacked self-esteem, just look at the lyrics for “Nobody’s Heart” and “Why Can’t I”.

The final sentence of his obituary in the New York Times of November 23rd 1943 is –“Mr Hart was not married”.

This is a text widget. The Text Widget allows you to add text or HTML to your sidebar. You can use a text widget to display text, links, images, HTML, or a combination of these. Edit them in the Widget section of the Customizer.
%d bloggers like this: